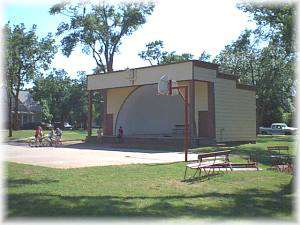 Conway Springs has always taken great pride in its music which dates back to 1885. The bandshell in Central Park was built by subscription in 1910. From this beginning came the famous summer band concerts and the fall sacred concerts by bands often assisted by large choruses. The Boy Scout bands of the early 1920s were also quite famous and made many train trips as the Missouri Pacific Booster Band.

Over the years the band shell fell victim to neglect and vandalism and was scheduled to be torn down by the city in 1975. A week before the scheduled razing, a group of interested citizens obtained a reprieve for the band shell. With contributions from alumni and concerned citizens, money was raised to refurbish the band shell. The restoration was completed in 1983 when granite was applied to the interior surface.

Things to do Amphitheaters near Conway Springs, KS