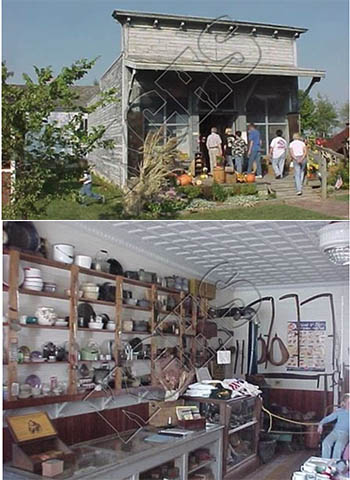 Construction of the Corrigan Store was completed on the Lyon Farm in 1986 using the original Corrigan Store front. The walls and shelves on the inside are stocked with period memorabilia reminding us of life as it was during the beginning of the century.

Chapel On The Green

The Plano Depot was built in Chicago, Illinois and hauled to Plano on flatcars in the 1850's. It was built by the C.B. & Q Railroad (Chicago, Burlington & Quincy Railroad) in the Gothic Style architecture. The depot was used until 1914 or 1915

The Oswego-Fox House was built in the 1870's by the Fox family, ancestors of the Cutter family from Oswego, Illinois. The house was located 1/2 mile south of Oswego on Route 71. It was moved to Lyon Farm at the Kendall County Historical Society museum complex in 1975

Things to do Museums near Yorkville, IL

Heritage Canyon is a 12-acre quarry that houses a restored and furnished mid-1800's settlement with paths through wooded hill...

The Mack home and Whitman Trading Post were built in 1834 by fur trader Stephen Mack, one of the area's first settlers. It is...