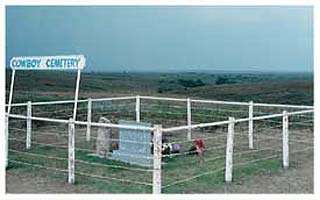 Back in 1878, history records and legend embellishes, Fred Clark and Reuben Bristow were cowhands working for what later became part of the huge Comanche Cattle Pool based out of southern Kansas. Clark and Bristow were dispatched to ride south into what was the Indian Territory in northern Oklahoma near where the town of Freedom now stands. Their task was to get salt from the flats on the Cimarron River and haul it back to the ranch to be used for supplementing the diet of cattle.

At about the same time, a band of Northern Cheyenne had enough of the hardship imposed on them after being displaced from their home and stashed away like cattle at Camp Supply (now Fort Supply), and later -- in even harsher conditions -- at Cantonment (now Canton). The Cheyenne vowed they'd rather die on the trail home to the Dakotas than rot in confinement with their southern cousins. So they headed north.

Most of the band of about 500 Cheyenne were tired, sick and starving older people and children. Ranchers of the day reported spotting them many times along the route. But off in the distance, supplying them and keeping a watchful eye on the band, was a group of younger braves who stayed out of sight to avoid attracting danger to the children and elders.

In what is recorded as the last Indian raid in Oklahoma, the braves crossed paths with Clark and Bristow on what is now the Sprawling Hill Ranch. When the cowboys failed to return to the ranch in Kansas, several more cowboys were sent to follow the trail in an effort to locate them. Ranch foreman, Frank King, was among the search party.

King died in 1914, but his wife, Almeda survived him by 50 years and often told her niece, Iona Wares, about how King and the other cowboys discovered the bodies of Clark and Bristow -- still in the bed of the salt wagon, their bodies so badly bloated they filled the bed from side to side. Bristow had been shot in the back of the head, and both men had numerous arrows embedded in their bodies. The cowboys' mule team and guns were gone.

Charles Colcord helped bury the men and later wrote: "The September weather was intensely hot and dry. It surely was a hard job to dig that gravel with a shovel and spade in the dry joint clay. Always two of us would dig while the third man would remain on watch at the highest point of the divide."

Two cedar stumps were erected at the head and foot of the single grave site which contained the remains of the two cowboys. R.E. Hill, who homesteaded the land some two score years later, erected a fence around the grave site to keep the cows from trampling over it.

It wasn't until the 1940s when another rancher, John Watters, carved the crude, sandstone misspelled marker that still guards the site where the cowboys rest. - "2 cowboys and salt hall killed by Indians," it proclaims.

For years the curving county dirt road into the Wares ranch has passed right next to the grave site. Wanting to preserve the dignity of the site they began taking care of it on their own.

Now, the remote site atop the wind-swept ridge -- a site where one can easily see clearly all the way to Kansas -- has a quiet dignity all its own. The crude marker has been enhanced by an attractive new monument that briefly details the sad story. The monument was donated by Buddy Sams of Alva Monument and Southern Granite Company, and David Edwards of Elberton, Georgia. Both markers are surrounded by flowers, a clean white fence, and a hand-painted sign that reads simply, "Cowboy Cemetery."

The Cowboy Cemetery is located north of Freedom about 11 miles past the Camp Houston junction of highway 50 and highway 64. Shortly after the paved road ends and the road turns to gravel, turn left where the sign points toward the Wares ranch. The site is about two miles from there on the right hand side of the road.

Come visit us in Freedom, Oklahoma

Things to do Cemeteries near Freedom, OK

In 1981, a stone was laid to mark the grave of the Reverend David Oakerhater Pendleton in a small cemetery west of the presen...