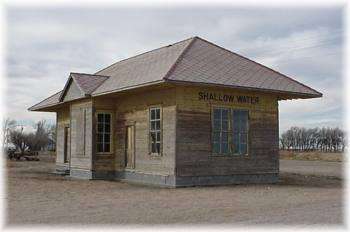 The Shallow Water Depot will hopefully find its permanent setting at Selkirk, Kansas, after making its fifth move in over a hundred and thirteen years and restored as it would have looked in 1887.

The building had to be sold and removed from it?s present location at Pierceville caused by the new four-lane highway being built across Kansas. This is an excellent building and will add much character to the Selkirk site. We have been told this depot started at the Alfalfa station site, on the Garden City, Gulf & Northern Railway between Garden City and Scott City, Kansas, which was only 35 miles long. The first passenger train to Scott City ran on Dec. 30, 1909. The train only had to maintain a 20 m.p.h. schedule, so would stop and let people on or off anywhere along the line! The legal description of Alfalfa was Range 33 W, Twp. 23 S, Sec. 11 in Finney County. A very small shelter was built at Shallow Water, and the larger depot at Alfalfa. Before long Shallow Water was needing a real depot, and the two buildings were exchanged, very possible loaded on a railroad car and moved. The line was purchased by the Santa Fe Railway.

The large hip roof is made of slate tiles and is in excellent condition. The depot will be painted the original color of the Santa Fe Railway, which was brick red with green trim and the name of "Selkirk" will be painted on the ends. The area will be landscaped and a brick platform will be laid in the front of the building. A security system will also be installed. A plan in the distant future is a replica of the large water tank to be built. An application to the National Register of Historic Places has been made, having made our first application to the Kansas State Register and receiving their nomination to apply to the National Register.

The historic depot sets the atmosphere with perfection. While being an excellent display of the past railroad history in itself, the depot will be used as an area for the railroad model displays and other railroad artifacts, rest rooms and a gift shop. Landscaping and picnic tables are also in the future plans. Word from an official of the National Railway Co. is that they know of no other railroad well in existence.

To Leoti calendar of events

Things to do Railroad History near Leoti, KS