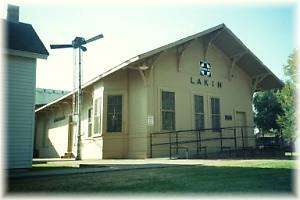 Lakin originated as one of the early stops on the Santa Fe Railroad from Dodge City to Colorado in 1872. This depot, constructed in 1876, replaced the original boxcar depot. The depot was moved to the museum site and restored in 1984.

Mr. James Thomas, grandson of the O'Loughlins, had worked for the railroad for many years. He helped to put the station in proper order and contributed countless pictures, documents and equipment to make the depot complete.

Things to do Railroad History near Lakin, KS