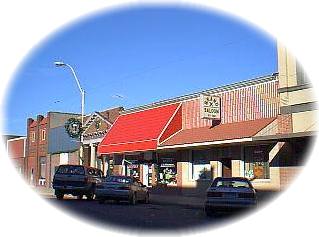 Dodge is a small thriving community of 800 located just off Highway 91 in northwest Dodge County. Receiving many compliments on its neat appearance and friendliness, it is a place where neighbors form friendships and children can safely ride their bikes or walk anywhere in town. Dodge is a great place to live, work and raise a family.

Early settlers, many of whom were German, Czech, and Polish immigrants, were encouraged by persistent rumors of a railroad to be built between the Elkhorn and Platte Rivers, and by 1886, the city of Dodge was platted. Disaster struck on September 16, 1895, when fire destroyed the entire business district and one-fourth of the residential area. Rebuilding was soon underway, through financial and material assistance from the large surrounding area. This time, however, buildings were constructed of brick, most of which are still standing today.

From the Village of Dodge - Centennial Tribute to the Dodge Criterion, 1987:

Man is quite the creative being.

But possibly man reaches his greatest creative heights when he builds a town where before there was only a hill or a valley, a prairie or a wood. For it's then that man comes closest to creating something in his own image ... a living, breathing thing that laughs and weeps, that revels and suffers, that grows up and gets old.

Finally, it's the people who breathe into a town a soul, who make it possible to look back on 100 years of a proud history and to look ahead with even greater hope to the future.

Located on the West side of the Dodge City Restaurant in downtown Dodge.

The historic Town Hall building was built in 1896

Education was a top priority during the growth of Dodge, starting in a brick schoolhouse built in 1887. An addition was needed in 1889. According to a 1891 report, District 46 had 143 students and four teachers. St.Wenceslaus Catholics opened a parochial school in 1911

To Dodge calendar of events

Things to do near Dodge, NE

The Skylon Ballroom in Hartington has a storied history. Performers such as Guy Lombardo and Lawrence Welk played at the ...