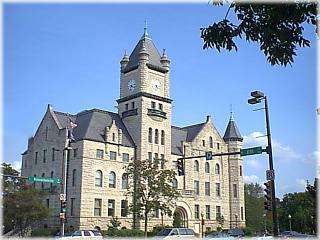 Lawrence financier, Mr. J.B. Watkins, owned the land south of town where he had constructed a magnificient building to house his bank and mortgage company - that building is currently the Watkins Community Museum of History. When the county courthouse location was decided in 1902, Watkins donated the land for the courthouse to help bring people towards his bank and business. There were protestations in 1902 that it was too far from the business district. Of the eight sites proposed for a courthouse seven of them were north of ninth street. However, the donated land persuaded the county officials to locate at this corner.

Things to do Historic Courthouses near Lawrence, KS