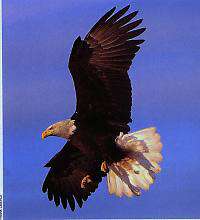 Bald eagles require a relatively large amount of food. Therefore, areas such as those below Central's hydro plants are attractive to eagles because of the abundant and readily available supply of fish, one of their favorite foods. During the winter, when ice forms on area lakes and rivers, bald eagles and many species of waterfowl concentrate in areas where open water can be found. Because of turbulence created by the action of the hydro-plants, the water immediately below the plants remains open and is a favorite fishing spot for the eagles.

The Central Nebraska Public Power and Irrigation district provides facilities from which the public can watch eagles and other wildlife. Inside the Johnson No. 2 Hydro (J-2), bleachers are situated in front of a large window which looks out over the Supply Canal where the eagles swoop to capture fish and rest in the trees along the banks. Binoculars are provided and attendants are available to answer questions.

It is important for visitors to remain in the facilities while watching the eagles. The birds are easily disturbed and are particularly cautious of humans. Trying to approach the birds or loud noises could frighten the birds from the area.

Groups wishing to visit the facilities are encouraged to make arrangements by calling one of the following phone numbers during normal business hours. Individuals or smaller groups can also call ahead to make sure eagles are at the sites. There is no guarantee that eagles will be present at all times.

Central's facilities are open from mid-December until eagles leave the area, usually toward the end of February or early March. The facilities are closed on Christmas and New Year's Day.


Come visit us in Holdrege, Nebraska

March is the peak month for viewing waterfowl at all of the wildlife preserves. At the Funk Lagoon you may see more than 500,000 ducks and geese per day, and over 20

Things to do Birdwatching near Holdrege, NE