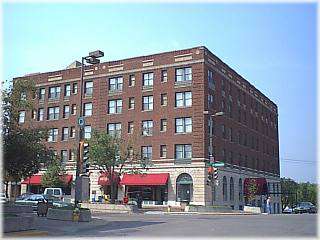 Pro-slavery attacks burned the Eldridge Hotel to the ground twice during the years of "Bleeding Kansas." In the 1863 raid on Lawrence, Kansas, the first goal of Quantrill's raiders was to capture the Eldridge House. A large brick structure, it was situated on the highest point of the town. The Eldridge House was potentially "a fortress" that could harbor armed men. Nearly all of the raders rode directly to the hotel and surrounded it. The hotel guests were awakened by shouts, gunshots, and the hotel alarm bell. They had few weapons and were defenseless against the armed marauders. Captain Alexander R. Banks, the provost marshal of Kansas, waved a white sheet out a window and arranged with Quantrill to surrender the hotel and the personal valuables of its occupants in return for their safety. Even so, the unruly raiders threatened the prisoners' lives until 'Quantrill was further persuaded by Robert S. Stevens, an attorney, to honor his promise. The hotel residents were then moved and held at the City Hotel, one block away, for the balance of the Raid. The City Hotel had served as Quantrill's residence when he lived in Lawrence, and the owner was a personal friend. The Eldridge House was then ransacked and set afire. The rapid surrender of the Eldridge House enabled the raiders to proceed, virtually without resistance, into other parts of the city.

Today, the Eldridge Hotel is listed on the National Register of Historic Places and serves as a reminder of Lawrence's perseverance and strength. History and hospitality converge in the lobby of the Eldridge. The rich woods, fabrics, and furnishings of the newest incarnation of the Eldridge highlight the contrast between a legendary Civil War past and the quiet elegance of a beautifully reconstructed present.

Things to do Historic Hotels near Lawrence, KS