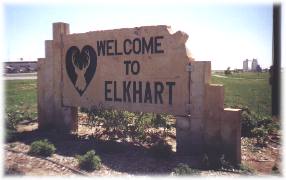 "Slowly, the covered wagons came carrying these determined people with their dreams of becoming "independent land owners". The absence of human landmarks neither depressed nor disheartened, but instead they found something frank and joyous in the open-faced country.

They lived in dugouts and sod houses (lumber was scarce on the "treeless" plains) and purchased their needs on credit, later paid for by the fruits of their endeavors, the sale of cattle or at the time of harvest."

Visitors will want to see "8 Mile Corner", where the states of Kansas, Colorado and Oklahoma meet. It is located eight miles west of Elkhart on the State Line Road.

Things to do near Elkhart, KS

The Protection Golf Course has nine all grass greens and tee boxes. ...