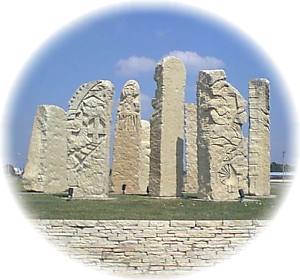 Lyon County surrounds Emporia which is known as the "Front Porch to the Flint Hills." Prairie Passage Stone Sculpture reflects Emporia's role as gateway to the Flint Hills, depicting the land, its forces and its people.

The Exoduster movement in the 1870's resulted in the resettlement of African-American ex-slaves onto small farms, while in the years around the turn of the century Mexicans were brought in by the Santa Fe to work on the railroad. In more recent years refugees from Southeast Asia have moved into the larger Flint Hills towns.

In the spring, the Flint Hills becomes a natural wonderland with the grasses and wildflowers. The barren landscape becames green and lush attracting over 200 kinds of birds including hawks, robins, blue jays, meadowlarks, and eagles. There are 29 kinds of reptiles and amphibians, such as turtles, snakes, and armadillos. There are also 31 species of mammals.

Dedicated on May 26, 1991, the first Memorial in the nation honors all Veterans from all wars. The park features a World War II M-4A6 Sherman army tank, a memorial to Emporian, Sgt. Grant Timmerman. The "Vietnam Veterans Memorial" was dedicated March 29, 2001

One of Emporia's premier attractions, it proudly recognizes and honors outstanding teachers K-12

Things to do near Emporia, KS

This house, a National Historic Register Landmark, was rented by William Allen White in 1899 and purchased by him in 1...