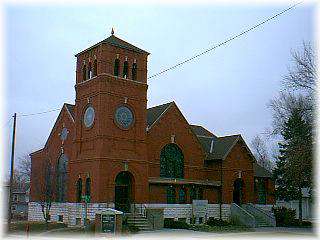 The First Congregational Church of Ashland traces its roots to courageous Separatists who broke with the Anglican Church of England in the sixteenth century and believed they should be able to voluntarily meet with other believers and worship in their own way without regard for the rules established by the government. The pilgrims of the Plymouth Plantation in Massachusetts had declared their spiritual independence.

The Congregationalists were among the first pioneers who began moving west in the early 1800s and as the trails converged at Saline Ford, now Ashland, the first church was established in 1856.

The present church building was dedicated in 1906 with beautiful leaded stained glass windows. Madonna and Child, Good Shepherd and the rose window in the nave above the altar, Christ in the Garden of Gethsemane, provide inspiration and solace to those who come.

Today, worshipers are inspired by the magnificent sound of the recently restored 507 pipe organ. Originally purchased in 1915, the instrument then required pumping the bellows. In the year 2000 restoration, a new rank of more than 70 trumpets pipes was added for a total of eight ranks.

Travelers, visitors, and all residents of the community are invited to attend Sunday morning services.