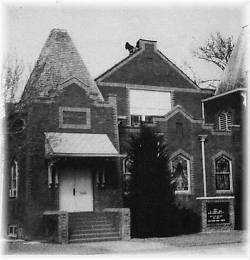 Included on Howard County's historic church tour is the First Presbyterian Church, the oldest church in St. Paul. On October 26, 1879, the Reverend G.L. Little, missionary, met with 12 local people to organize the First Presbyterian Church of St. Paul. Church lots were given them by Howard County. A frame building, 34 x 56 feet, cost about $4,000, and was dedicated on April 13, 1881.

On February 19, 1905, this church was destroyed by fire. The organ, bell, and communion set were all that was saved. The bell weighs 612 pounds and cost $200 in 1881. This bell tolled at the death of President Garfield in 1881. It also rang in 1900 to proclaim the end of a smallpox quarantine.

The cornerstone of the present building was laid on September 19, 1905; the building was completed in 1907. The stained glass windows have been dedicated at various times in memory of loved ones. The present organ, a third one, was installed in 1979.

The present congregation recognizes the beauty and historic value of the building and is trying to make it handicapped accessible without destroying its appearance.

Things to do Historic Churches near St. Paul, NE