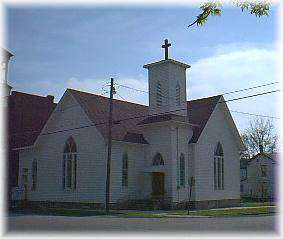 The United Methodist Church was built in 1881 at a location a few blocks north of its present location in 1903. Originally in the 1870s, the Methodist Episcopal Church and the Methodist Episcopal Church, South groups met in homes until both were able to build in 1881. In 1903 the South Methodists had bought the lot where the Church now stands, and had moved their church to this spot and a large east wing was added, the tower improved, and the interior altered and redecorated.

About the time of the first world war, the Resident Bishop, Wm. A. Quayle of St. Louis, and the conference officials requested the two Methodist Churches to combine. From 1924 to 1944 a uniting process went on of all three branches of Methodism; Episcopal was dropped from the title; in the sixties, the United Brethren Church came into this union and these four church groups are now the United Methodist Church with over 14,000,000 member nationally.