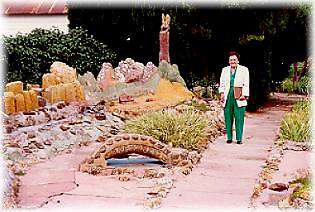 Florence Deeble was a child watching with curiosity, when S.P. Dinsmoor was
constructing his Garden of Eden in Lucas. When she retired after a career as a high school English and history teacher, she began constructing her own grassroots environment of colored concrete scenes around her home.

First prompted by her mother's insistence that she fill in a fish pond in the garden to prevent anyone drowning in it, Miss Deeble

began to create concrete "postcards" of holiday sites she had enjoyed.

Even after she was no longer able to do the cement work herself, she devoted herself to celebrating the early history of Lucas, balancing her earlier model of Mt. Rushmore with a work honoring four Lucas notables.

Things to do Arts near Lucas, KS