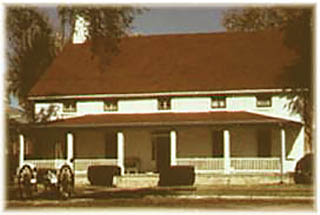 Fort Dodge was established April 10, 1865 by Captain Henry Pierce, 11th Kansas Cavalry, by order of Major General Grenville M. Dodge, commanding the department. Although there is some doubt, the post was probably named for Colonel Henry Dodge, 1st U. S. Dragoons.
The post was designed to protect the U.S. mail and emigrant wagon trains on the Santa Fe Trail, and to serve as a base of operations against hostile Indians. It was located on the left bank of the Arkansas River on the "Long Route" of the Santa Fe Trail a few miles southeast of the present Dodge City. The site lay near the intersection of the "wet" and "dry" routes on the Santa Fe Trail.

The military reservation was transferred to the Interior Department on January 12, 1885. The fort was converted to the Kansas Soldiers Home in 1889.

A historic library and self-guided walking tour tell the fort's history to visitors. Many of the original buildings are still in use.

Things to do Forts near Dodge City, KS