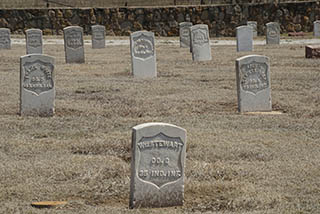 Both civilians and soldiers were buried in the military cemetery. The saying then was "the rich are buried at the Fort and the cowhands and poor are buried on Boot Hill or gone to "hell." Friends and family buried Marshal Ed Masterson, Bat's brother, at Fort Dodge in 1878. Some drunken cowboys killed the Marshal in a dance hall south of the railroad tracks in Dodge City when he tried to enforce a disturbance of peace incident. Masterson's body was later moved to a cemetery that no longer exists in Dodge City. No evidence of his burial site remains today. The bodies of military personnel were removed to Fort Leavenworth in 1886. Presently, the cemetery is part of the Kansas Soldier's Home property.

Things to do Cemeteries near Dodge City, KS