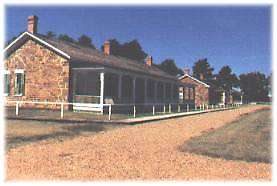 Fort Larned was established in 1859 as a base of military operations against
hostile Indians of the Central Plains, to protect traffic along the Santa Fe Trail and as an agency for the administration of the Central Plains Indians by the Bureau of Indian Affairs under the terms of the Fort Wise Treaty of 1861. Originally, the Army posted dugouts and tents along the Pawnee River. The post name was changed to Camp on Pawnee Fork, then it was changed to Camp Alert because there was need to be alert for Indian raids. The post was later moved and renamed to Fort Larned.

With nine restored buildings, it survives as one of the best examples of Indian Wars period forts. Today it is operated as a National Historic Site by the National Park Service. Most of the buildings including: barracks, commissary, officers quarters
and more, are furnished to their original appearance. Fort Larned National Historic Site takes visitors back to this turbulent era in our nation's history.

Visitor Center/Exhibits:The visitor center has a museum, introductory slide show, library, rest rooms and bookstore. There is a nature trail and a detached site where one can still view ruts left in the ground from wagons that traveled down the Santa Fe Trail.

shop, hospital, blockhouse, commissary and officers quarters. During the summer season, there are weekend demonstrations providing a more detailed look at life in the 1860s. Other special activities are scheduled from April to December.

Come visit us in Larned, Kansas

While you're visiting Larned, visit Schnack Park. Take in the fresh air amid the greenery of the Park. A spacious swimming pool is also available to take away summer's heat. Pack a lunch, view the fountain and relax in our picnic area. Ride the "Schnack Express"

Things to do Forts near Larned, KS