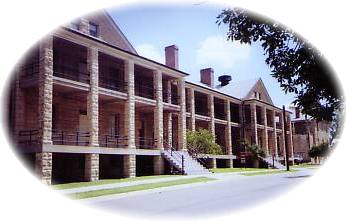 In an 1843 expedition, Captain John C. Fremont, "The Pathfinder," camped at the junction of the Smoky Hill and Republican Rivers. He reported great numbers of elk, antelope and Indians. Most of the Indian tribes were friendly at the time, because settlers had not yet moved into the area.

Within a few years, however, the "Great Migration" along the Oregon Trail and trade along the Santa Fe Trail brought thousands of pioneers through the "Indian Territory," as Kansas was known back then.

Indian war parties began raiding wagon trains as they traveled through the bluffs of eastern Kansas. It became evident that military protection was needed for these pioneers. Thus began the chain of events leading to the founding of Fort Riley in 1852. At the time it was named Fort Center - because it was believed to be the geographical center of the country. In 1853, the post was renamed after Major General Bennett Riley.

Fort Riley stood as the major horse cavalry training school in our country and boasted a position as one of the best cavalry training schools in the world. The famous 7th Cavalry was put through harsh and difficult training before leaving for campaigns against Indians. From the gates of Fort Riley, the cavalry rode to such famous campaigns as: Beecher's Island, the Washita River Fight, and Battle of the Little Big Horn.

The First Infantry Division, more commonly known as the "Big Red One" - the "Fighting First" - came to Fort Riley from Germany in 1955 and remained in Kansas until 1995. Today Fort Riley is known as home of America's Army.

Things to do near Fort Riley, KS