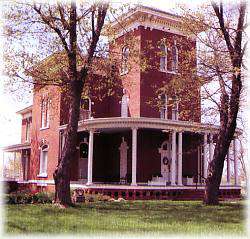 The Italianate Victorian home presently known as Hiatt's House Restaurant, owned by Mr. & Mrs. Richard Tredway, was built in 1879 by Col. J.C. McMullen, a local banker. Other owners were George Miller of the famed 101 Ranch from 1888 to 1902, and the J.W. Hiatt family from 1902 to 1974, great grandparents of Nancy Tredway.

Inside features include a circular spiral stairway to the third floor with unique newel post, pocket doors, transoms over the single doors and three original fireplaces.