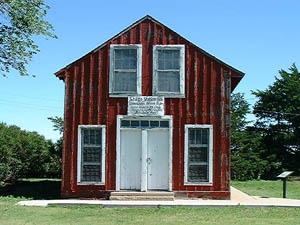 On the grounds of the Fort Wallace Museum visitors will find the original Pond Creek Stage Station, built in 1865 as a "home station" along the Butterfield Overland Dispatch stage lines. It is listed on the National and State Historical Registers. Pond Creek Station assumed the name of Pond City in 1868, and was the first county seat of Wallace County.

Also on the grounds is an old railroad depot which once served the Union Pacific Railroad at Weskan, Kansas, and the Sunderland-Poe Building which is the newest of the museum buildings and contains the largest of our exhibits, including Conestoga Wagon replicas, wagons, and farm implements.

The Museum is open from the first Monday after the first Sunday in May through October 1.

Admission: FREE ADMISSION
Hours: 9 am to 5 pm Monday -Saturday
1 pm to 5pm Sunday
(Mountain Time Zone)
Address: One and a half miles southwest of Wallace on Highway 40, 10 miles east of Sharon Springs.
Phone: 785-891-3564
Our Email: museum@ftwallace.com
Our Website:www.ftwallace.com/

Things to do Museums near Sharon Springs, KS