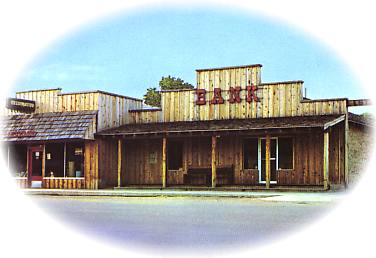 Visitors to Freedom are astounded by the lingering presence of the "Old West," as nearly every building in the downtown area is fronted with native cedar wood in designs typical of an early day cowtown.

Just to the south of Freedom, amidst a series of deep, rugged canyons inhabited by Indians and outlaws years ago, is Alabaster Caverns State Park. The caves serve as a summer refuge for over one million Mexican Free-Tailed Bats that can be viewed emerging in mass for their nightly insect feeding. Just west of Freedom the Cimarron River has created one of Oklahoma's largest natural salt deposits. In the rolling hills north of Freedom is a remote and lonely site known as the Salt Haulers Grave, where a crude, hand-carved stone marks the burial site of two unfortunate cowboys, victims of one of American history's last-known Indian raids.

Freedom's population swells to about twenty-five times its normal size the third weekend of August each year, as local volunteers stage the "Annual Freedom Rodeo and Old Cowhand Reunion," This annual event has been recognized as one of the more outstanding activities in the state of Oklahoma. The week-end long action includes nightly rodeos and western music and dancing, and on Saturday of rodeo week-end a free chuck-wagon feed and fine western art and country crafts show are held in downtown Freedom. Saturday afternoon will find visitors anxiously awaiting the performance of the "Great Freedom Bank-Robbery and Shoot-Out," which is a melodramatic farce put on by local residents.

Downtown Freedom abounds with interesting attractions, including an inspirational cowboy building mural entitled "Posting the Colors." The Freedom Museum highlights local history. The Cimarron Cowboy Monument is a magnificent portrayal of the early-day cowboy and the environment in which he lived and loved so much. The Freedom Public School ranks among the very best, and provides the latest in curriculum and technology training.

The cowtown atmosphere, the beautiful surroundings, and the genuine hospitality of its people, all blend together to make Freedom --- a town as unique as the name itself!

Things to do near Freedom, OK