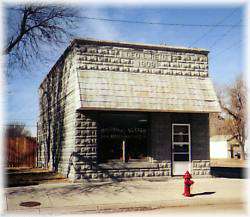 George L. Reid was a native of New York, born in 1864. He came to Kansas about 1879, graduating from Campbell University at Holton, Ks. in 1884. Like many successful lawyers he had a preparatory experience as a teacher. For several years he taught in the country district of Brown Co. and did similar work in Jackson Co. Teaching furnished him a means of support and also afforded him long vacations in which he could pursue the study of law. He read law at Holton with the firm of Keller & Noble. After completing his studies he went though the ordeal of examination before a committee consisting of Judge Lowell, C.B. Humble and C.F. Hurrell. He was examined in Judge Lowell’s office and was admitted to the bar before Judge Crozier.

With his license as a lawyer, Mr. Reid hunted up a field where he might win fame and fortune. Thus, a youth of 23, arrived in Greeley Co. in the spring of 1887. His first law case in the county involved the charge of libel. He was associated with W.H. Glenn in prosecuting this case and won that suit. For nearly 30 years, Mr. Reid continued to handle such cases, and, on the whole, with a high average of success and performed all the work which a general practitioner usually takes. His recognized specially was land and title and probate work and he prepared a set of abstracts of title for the county, the only complete set of books, and for a number of years, furnished abstracts to settlers and investors. As a lawyer, his most notable case was the defense of Hornung, charged with the murder of John Eckhart. The circumstances of the crime tended to show that the defendant had little ground for sympathy from the public. There was strong talk indulged in of lynching. He was charged with murder of the first degree. After serving his sentence he returned to the county and became one of the most substantial farmers. In 1892, George brought his bride, Elizabeth, to Greeley Co. They lived on north Plumb Street and he was also appointed deputy county attorney that year; later he served many terms as county attorney. He built a cement block law office on Broadway in 1910 and Sleigh Abstract now occupies that building.

Elizabeth did dressmaking and had a millinery shop in her home. She was a good musician on the piano and taught many of the young folk in the community to play. She liked to entertain with taffy pull parties. They built a home on north Broadway, The house is now occupied by the Byrom Myers family.

George and Elizabeth had four children; Charles “Chick”, Elizabeth “Beth”, Leslie and Alberta. The family attended the Methodist Church in Tribune until George organized a class of boys in the Presbyterian Church in 1910.

In matters of politics, Mr. Reid was always a loyal Republican. In Greeley Co. he served as a member of the congressional committee and attended congressional conventions frequently, and, as a member of the state convention, helped nominate Governor Morrill and Governor Stanley. In 1898, Mr. Reid was elected a member of the Lower House of the State Legislature. He served during the term of speaker Osborne and speaker Barker. In that time he lent all his influence to the passage of the legislation providing for the biennial election law.

As a local citizen, Mr. Reid was a director of the Tribune bank since its organization and contributed to the town’s development by the building of his own home and offices. He also gave the land for the location of the State Demonstration farm, a half mile west of Tribune.

Aside from the practice of law, when George came to Greeley Co. he walked from Wallace into Colony Township and homesteaded the northwest quarter of 1-20-43. With a pair of oxen he broke up some of the sod, lived in a sod house and proved up the claim. Thus he knew first hand what the lot of the early settlers was. A considerable part of his business had been in Greeley Co. lands and he himself developed a ranch property of his own. He saw the county fill up with settlers in the pioneer days and also witnessed the practical depopulation which followed the hard years.

Come visit us in Tribune, Kansas

To Tribune calendar of events

Things to do Historic Buildings near Tribune, KS