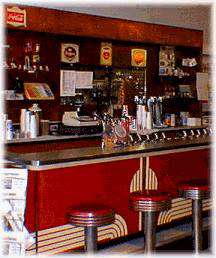 The original drugstore building was built in 1917 and until May 4, 2007 when the city of Greensburg was hit by an EF5 tornado which destroyed the building, it had been a pharmacy. A gentleman by the name of McKinley, built the building and moved his pharmacy into it. This is one of the only buildings in Greensburg that still had the same type business as when it first opened.

The only changes to the building, beyond normal maintainence, were the new soda fountain (installed in the 40's), new ceiling fans and lights and floor tile installed over the last ten years. Otherwise, the building remained relatively unchanged.

Today, the soda fountain stands proudly as a living history exhibit in the Kiowa County Commons Building of the Historical Museum, being enjoyed by new generations as well as devoted pre-tornado patrons. Visitors are pleasantly surprised that the drinks are all still hand mixed by a sodajerk. Some of the local people still get their daily dosage of a chocolate soda, or a vanilla phosphate, and wouldn't even consider going somewhere else.

Things to do Historic Buildings near Greensburg, KS