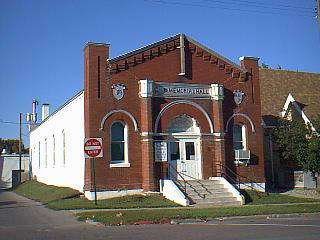 The Grand Army Republic offered membership to all military personal who served in the Union Army from 1861 to 1865. The purpose was to provide camaraderie for the veterans and support for the widows and orpans of the union soldiers. The G.A.R. Hall in Nebraska City was just one of close to 100 in Nebraska. Now only four remain.


After more than 55 years of use, the Hall was closed. Sixty years later, a private foundation bought the building with the intention of reopening it as a Civil War museum. The building was authentically restored. Inside there is a library and many displays showcasing items of the Civil War, many were original to the building. Throughout the year the building is open to visitors. At times, volunteers dress in their period uniforms to welcome the visitors and relate the history of the building. At Christmas, the building and traditional Christmas tree are adorned as they would have been in the early days. The building smells of oranges garnished with cloves, a traditioin of Civil War times.