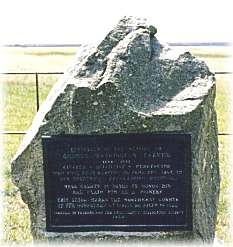 In August 1886, Carver established a claim on the SE ¾ of 4-19- 26 approximately l½ miles south of present day Beeler. He maintained a small conservatory of plants and flowers and a geological collection; as well as working for George H. Steeley on his ranch and doing odd jobs in town.

While trying to prove up his claim he broke out seventeen acres, all of which were plowed, and planted rice, corn, Indian corn and garden produce. Also, he planted forest trees, mulberry, plum and apricot fruit trees and shrubbery. He made all these necessary improvements with a spade, hoe and corn planter, but no domestic animals.

In early 1888, after successive years of drought, Carver obtained a $300.00 loan from
George A. Borthwick, Vice-President of the Bank of Ness City, stating he wanted to further his education. In June of that year Carver left the area, and on January 1, 1891 he deeded his claim over to Fred C. Borthwick for one dollar and other valuable considerations.

Shortly after his death in 1943, there was a movement by the Ness County Historical Society to erect a monument marking the site of his homestead. After many years of fund raising, a stone marking was dedicated in his honor on Sunday, October 11, 1953. This site was entered on the National Register of Historic Places on November 23, 1977 by the Kansas State Historical Society. This marker simply states:

Dedicated to the memory of
George Washington Carver

Erected by friends and the
Ness County Historical Society
1953

In the late 1950's, a highway marker was erected on K-96 highway just west of Beeler by the Kansas Historical Society and the State Highway Commission. This marker pays homage to the inventor and humanitarian and directs travelers to the "Homestead of a Genius". HOMESTEAD OF A GENIUS

A mile and a half south of Beeler, Kansas, is a quarter section which was homesteaded by one of the great scientist of America, George Washington Carver. Through his discoveries agriculture in the South was evolutionized. From sweet potatoes and peanuts alone he made paint, soap, wallboard, milk, medicines, cosmetics and 500 other products, worth millions of dollars. A Negro, whose parents were slaves, he has been called the foremost genius of his race.

Carver was born in Missouri in 1864. He came to Kansas as a boy, drifting from Fort Scott to Paola, Olathe, Minneapolis and Highland. He did odd jobs, took in washing, cooked, attending school when he could. At 17, classed with 6th graders in Minneapolis, he was reported "perfect in deportment." He was 22 when he homesteaded here, and built a sod house. Two years later he
mortgaged his claim to go to college. At 32, with a master's degree, he went to Tuskegee Institute, Alabama, on a salary of $1,500. Although Edison once
offered him $100,000 a year, he remained there until his death in 1943.

Erected by the Kansas Historical Society and State Highway Commission

This memorial honors Ness County Veterans, with a special remembrance to those who made the ultimate sacrifice when answering their country'

The Iron Indian Display is located 1/2

We currently do not have any events for Ness City, Kansas in our database. If you know of events taking place, please add the event
.

Things to do Memorials near Ness City, KS