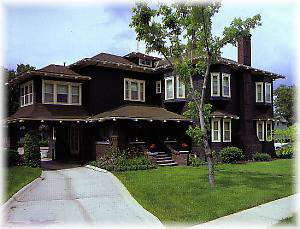 
The Glade-Donald House is a distinctive example of the Shingle style. The house is completely sheathed with wooden shingles, and incorporates many bay and oriel windows, including two prominent bow windows on the front facade. The house was built about 1905 by Henry Glade and remodeled by Lawrence Donald in 1918 and by John Donald in 1934. Russell Rohrer of Hastings was the decorator in the 1934 remodeling and created a very formalized and rich interior, with velvets, elaborate wall-papers, chandeliers, and other imported goods.


All three owners were prominent businessmen in Grand Island. Glade was the founder of the Henry Glade Milling Company, and brothers, Lawrence and John Donald established the Donald Company, a leading dry goods and grocery firm which served Nebraska and surrounding states for over fifty years.

The property also includes a garage/servants' residence built in 1923, which originally provided quarters for the butler and his wife. The house now servers the community as a restaurant.