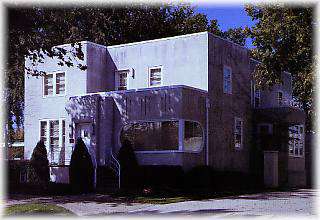 
The house is a distinct and significant example of a Nebraska dwelling designed in the Moderne style of the 1930s, a style never widely popular in the state. The original house, a one-story Victorian dwelling constructed in 1893 for J.J. Bartenbach, was redesigned by local architect, Gordon Shattuck in 1937-38 for Mrs. Bartenbach, giving the house its present appearance. Distinctive interior spaces include the open stairway and landing area, which features a newell post and balustrade of Modernistic design utilizing chromed rods and railings.