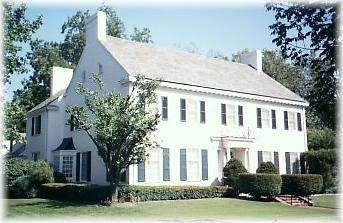 Another facility owned and operated by the Nowata Historical Society, the Glass mansion, better known as "The Glass house," is as fine a structure as many found in larger cities of the country. Built in 1883, its exquisite furnishings and graceful rooms are put to good use today for special occasions and tour groups. Even weddings and bridal showers are celebrated within its walls.

Homes that oil built are of architectural interest in that they represent the wealth of early Nowata. The Glass house is an outstanding example of this. The house was built by John Duncan Forsyth in 1932 for J. Wood Glass and his wife, Eva Dorothy Payne Embry Glass, and was designed by Mr. Glass who had come to Nowata in 1902, to join his uncles in the banking and mercantile business. He eventually established a law office and was prominent in oil activities.

Things to do Historic Homes near Nowata, OK