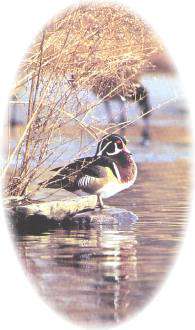 At one time Hackberry Flat was a large isolated wetland that in the wettest of years may have been more than 3,000 acres in size. Thousands of waterfowl and shorebirds once used this wetland as a stopping place during both fall and spring migrations.

In the early 1900s, settlers in the Tillman County area began a massive effort to drain the wetland. The rich, fertile soils found in the region provided great agricultural potential. A four-mile ditch, 20 feet deep and 40 feet across was dug by horse and sled and steam shovel. Despite the efforts, farming was difficult because the area was still prone to flooding.

In 1993 an effort began to purchase Hackberry Flat and restore it to its former glory. More than 7,000 acres of basin and watershed were purchased from willing sellers and restoration efforts were begun soon after. Nearly 35 miles of levees, ditches, and 70 water control gates have been constructed to carry water across the area. Flooding of the area relies on rainfall and a 17-mile pipeline from Tom Steed Reservoir. 4,000 acres can be flooded and 3,120 acres remain for upland habitat. No wonder Hackberry Flat has been described as one of the most significant wetlands restoration projects ever completed in North America. And it's a natural treasure we can all enjoy.

Construction of visitor/education facilities, including an interpretive center and trails, is slated for the near future to inform visitors of the history and importance of the Hackberry Flat area. Whether you want to enjoy the solitude offered by a fiery sunrise over shimmering wetlands or have your heart race with the anticipation of thousands of doves descending on a sunflower field, Hackberry Flat can satisfy your desires. After one visit, you'll be thankful to be blessed by such a place.

Since the area is a wetland, all shotgun hunting at Hackberry Flat is restricted to federally-approved non-toxic shot only.

Dove - The area offers some of the best dove hunting in Oklahoma, maybe even the country. On a good day, you'll see thousands of doves. If you're coming during the opening week of the season, plan ahead - area motels fill up quickly.

Waterfowl - Duck and goose hunting is perhaps Hackberry Flat's best draw. Southwest Oklahoma is known by serious water fowlers as one of the nation's best-kept-hunting secrets. Countless mallards, pintails, teal, Canada geese, and other waterfowl descend on Hackberry every fall.

Sandhill Cranes - The wing shooter's big game, sand hill cranes use Hackberry and the surrounding agricultural fields throughout the fall migration. For first-time crane hunters, fully-equipped guides are available who hunt near Frederick.

Rabbits & Quail - There are so many rabbits here that some days you can see dozens by just driving through the area! Quail hunting is also good at Hackberry Flat. An excellent mixture of upland cover and agricultural cropland produces habitat for both quail and rabbits.

Hackberry Flat is a premier destination for birders. More than 120 species have been identified during surveys, with such rare and uncommon species as the black-necked stilt, stilt sandpiper, and snowy plover being seen. Sheer numbers of birds make this area stand out as one of the best anywhere. A Check List is available by contacting the area at 580-335-5262.

CAMPING - Primitive camping is available on the area.

LOCATION - From Frederick, go south of town one mile on Highway 183, then turn east on Airport Road and go three miles. Follow the blacktop road south and go four miles. Watch for area signs, and enjoy!

Come visit us in Frederick, Oklahoma

Things to do Wildlife Areas near Frederick, OK