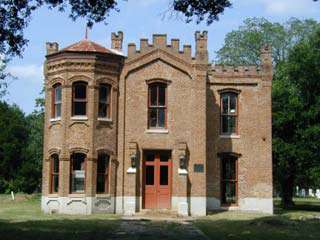 The Hammond House was originally built in 1876 to be a courthouse and jail. In 1870, by an act of the State Legislature, the county seat of Robertson County was moved to Calvert, Texas. This was the fourth county seat, and, perhaps in hopes of making Calvert the last, the Commissioners began to build a beautiful and impressive jail and had plans for a courthouse nearby. However, in 1879, the county seat was again moved to Franklin, this time as the result of a vote in a local election. The courthouse in Calvert was never built, but the jail, now known as the Hammond House, stands today.

This unique building became a hotel and then a private residence after the county seat was moved to Franklin in 1879. The Hammond family bought the house in 1909 and heirs sold the house to the city who deeded it to the Historical Society who eventually returned the deed to a family member who is completing restoration for interested occupants.


Come visit us in Calvert, Texas

Built in 1909 by the American Women's League (AWL), the building was the first AWL Chapter House in Texas and one of the first four built in the country. The design incorporates progressive turn-of-the-century "Prairie School"

The Episcopal Church of the Epiphany was built in 1869

The Hammond House was originally built in 1876 to be a courthouse and jail. In 1870

We currently do not have any events for Calvert, Texas in our database. If you know of events taking place, please add the event
.

Things to do Historic Homes near Calvert, TX

Known as the "Father of Texas Journalism," Colonel DeMorse founded The Northern Standard, participated in the Civil Wa...

Known as the Magnolia House and listed on the National Register of Historic Places, this fully restored Victorian hous...

Built in 1927 to serve as home for the president of Texas A&M University, the Heritage House has been restored to its origina...