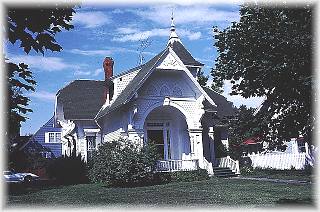 The Hanson-Downing House, built in 1886, is an excellent example of the American ornamented cottage. The asymmetry of forms, variation in roof sections, and textural variety create a picturesque effect and demonstrate the versatility of wood as a building material. The house was built by Charles E. Hanson and later sold to Wallace A. Downing. Both were businessmen in Kearney.