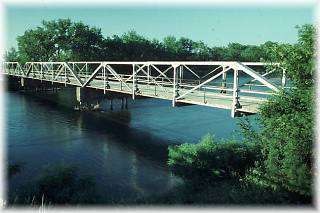 In November 1908 the Buffalo County Board of Supervisors adopted bridge plans prepared by the Standard Bridge Company as the county standards. The board awarded an annual bridge construction contract to Standard two months later, purchasing numerous small-scale bridges from the Omaha-based firm throughout 1909. Among the structures ordered in May was this eighty-foot pinned pony truss over Mud Creek in Beaver Township. Located at the Sweetwater Mill near the county's northern edge, the truss replaced an earlier bridge at this location, using the existing stringer approaches on both sides of the channel span in conjunction with new H-shaped steel pile bent supports for the truss. Standard completed the bridge later in 1909, using steel components rolled by Illinois Steel Company.

Although the pinned pony truss of the Sweetwater Bridge is unremarkable as a typical example of a relatively common structural type, the bridge is significant as one of the earliest and best preserved examples remaining in the state of an original Standard Bridge Company built-up H-pile substructure.

By 1915 Buffalo County had spent years maintaining and repairing the long, timber pile Kilgore Bridge over the north channel of the Platte River southeast of Kearney. That February the board of supervisors voted for the structure's replacement. The board adopted standard plans developed by the state engineer, awarded an annual bridge construction contract to the Omaha Structural Steel Works, and then solicited the state engineer's advice on the "most advisable method" to construct a new span at the site of the existing bridge. In June the county placed an order with Omaha Structural Steel for the new Kilgore Bridge: a three-span pony truss on thirty-six-foot steel piling foundations. The bridge is a noteworthy example of the state's then newly-formulated pin/rigid connection technology. Additionally, the Kilgore Bridge is one of the few remaining multiple-span pinned pony trusses in Nebraska.


Address: State Highway 10 over the north channel of the Platte River, 7.1 miles southeast of Kearney