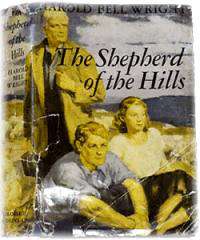 Many know that Harold Bell Wright's, "Shepherd of the Hills" was the most widely read book of fiction in the history of publishing! Few know, however, that many of the places, events, and characters are based on actual models. There really was an "old shepherd of Mutton Hollow," whose identity was blended with that of Wright himself into the central character of the book.

Harold Bell Wright moved to this area in 1896, where he lived south of Marionville with an uncle. His cousin, George Pollard, taught at the Mt. Vernon Presbyterian Academy, on College Street, and Harold moved to Mt. Vernon the next year. He lived in the house at 631 McCanse St. (corner of E. Sloan) and also at 707 S. Main. During this time he operated an art and decorating shop on the east side of the square (about where the First National Bank is now). He was known to have studied and lectured at the academy also.

Mt. Vernon native, James Marion Wood moved to Mutton Hollow for a two-year period in 1900, at which time Mr. Wright was a frequent visitor, and Wood tended sheep at the farm of "Old Matt," J.K. Ross. When Wright finally published his book in 1907, the world was introduced to the warm people and enchanted hills soon to be known as the "Branson" area. Harold Bell Wright's frail health demanded that he later mover to California, but he left behind a legacy, which included some endearing characters from Mt. Vernon and Lawrence County as well as from "Mutton Hollow."

Built in 1961 as a "thank you" to the people of his home county, Lawrence K. Jones provided a beautiful stone building which houses a wedding chapel, a meeting hall, and the Lawrence County Historical Society Museum.

The beautiful, stately, historic church, known familiarly as Brick Church because of its 17-inch thick brick walls, stands solidly in a picturesque setting of prairie land.

When the Moore family first settled there, there were Indian camps all along the bottom land. This spring puts out up to 13 million gallons of water a day, and has been a popular family picnic site for over a hundred years. It is located just beyond Rebel's Bluff and Old Shepherd'

Things to do Famous People near Mt. Vernon, MO