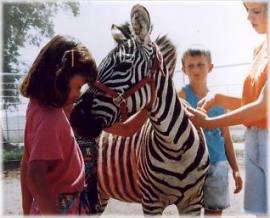 Eight miles West of Hutchinson camels, giraffes, kangaroos, ostriches, zebras and more can be found at Hedrick's Exotic Animal Farm. Seasonally, public tours are conducted on weekends for a nominal fee. Opportunities to feed and touch the animals are offered during the tour. Group hayrack rides and wiener roasts can be enjoyed with prior arrangement. Visitors will also find a bed and breakfast on the property with rooms uniquely designed to reflect animal themes.

Things to do Zoos near Hutchinson, KS