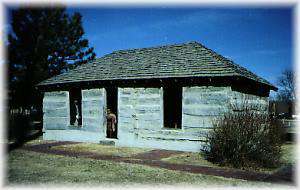 In 1859, Horace Greeley, who was a newspaper man for the New York Tribune, decided to make a trip west across the entire United States, and write about his experiences. The main purpose of his journey was to study the feasibility of the construction of a trans-continental railroad. He came by train to Kansas, but since Kansas had no railroad across the state, he traveled in a Leavenworth Pike's Peak Express Company stagecoach accompanied by Albert Deane Richardson, a writer on his New York Tribune staff. Greeley was 48, Richardson, 25.

As the stagecoach moved westward, stops were made at designated stagecoach stops where food and lodging could be obtained. The stops were called Stations and were numbered. Station 15 was in the vicinity where Norton, Kansas, is now located. There was no town here then, as Norton was not organized as a county or city until 1872.

Greeley and Richardson reached Station 15 on May 31, 1859. After a day's journey of 56 miles, they reached the stagecoach stop, which was located on the waters of the Republican River. They spent the night at Station 15 and the following morning ventured on their westward journey.

The original structure of the stagecoach stop had disappeared long ago. A local citizen knew of a log cabin that was found inside a house southwest of Norton. This house had been built as a fort for protection from Indian attacks. The original cabin had been hidden behind plastered walls of subsequent owners until the farm house was set for razing. The log cabin was then discovered, disassembled, and reconstructed in Norton. Appropriate furniture, clothing, and mannequins were donated to furnish the proper 1859 setting.

The following characterization presented at the Station 15 museum in Norton has been detailed to portray the various personalities that have been known to stop over at Station 15 during is short history of stagecoach transportation. Mannequins [Station 15 Guests] have been donated and set about the cabin to represent these historic figures.

" This is Station 15, midway on the Leavenworth Pikes Peak Express Route, Stagecoach and Wagon Train Depot on the shortest trail to the Denver Gold Fields.

The Scene is May 31, 1859. Characters are those definitely documented as present and some especially selected based on clues that tend to identify them:

Station keepers are Mr. and Mrs. William Bonney, Sr. By winter a son, "Billy the Kid," is born. Ex-Cincinnati lawyer, Bonney is small and frail. His was station duties are exhausting and he has removed this coat. He will die soon after Billy's birth and the widow, a former Bowery actress will leave Kansas with her small son. Billy, undersized like his father, is a killer at 12, and is killed at 21. Mrs. Bonney has here donned old remnants of stage finery to honor her famous guests.

A young squaw mourning an Arapahoe brave accidentally killed in hunting buffalo here, has remained with the Bonneys who befriended her. Her people now encamped to westward near Station 16, sorrowfully departed leaving a teepee for her and her child. Tents are the sleeping quarters for other guests in this spring of 1859.

Pat Garrett, eastbound driver, wears buckskin and a red bandanna. As a New Mexico sheriff some years later, he is forced to shoot and kill Billy the Kid. His assistant, Tiburcio Vasquez is a California outlaw who took this job to scout gold shipments.

Eastbound "Go Back," a runaway, (name withheld) has been working as a man in Denver mines. In custody of Pinkerton detective, Roy Bean , who later became famous as the "Law West of the Pecos," she is reconciling to her enforced return to her Indiana parents and back to school."

Things to do Railroad History near Norton, KS