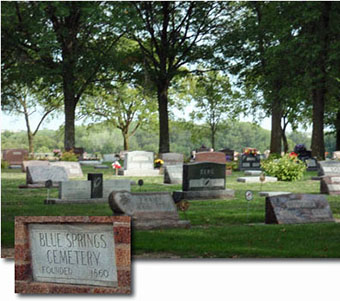 Founded in 1860, the Blue Springs Cemetery has the distinction of being Nebraska's Oldest Recorded Cemetery, registered on January 25, 1862. The first burial was Allen R. Johnson age 8 years and 2 months, the second son of Rev. Johnson, one of the first settlers at Blue Springs. Allen drowned in the Blue River on September 25, 1857, his re-interment in what was then known as the Blue Springs Methodist Cemetery (northeast corner of today's cemetery) was shortly after the Cemetery was established. The grave is marked with a First Burial monument in the Original Addition.

The Blue Springs Cemetery Association has devoted much time and effort to maintain the beauty and upkeep of the Cemetery. The perpetual effort includes repairs to the chapel and antique wrought iron fencing, planting trees, street improvements and onsite directory updates.

Each Memorial Day the Blue Springs Volunteer Fire Department displays large United States Flags along Monument Street. The Cemetery Board of Trustees plan the morning program and place small flags on Veteran's graves. During the Memorial Service, the Legion Chaplain places a wreath at the War Memorial followed by a traditional gun salute and Taps. Members of the Wymore American Legion Anderson Post #25 march through an Avenue of Flags placed in their honor. After the ceremonies, the United Methodist Church serves a free-will luncheon with proceeds going toward Cemetery improvements.

The old Chapel at the Cemetery holds a complete directory of lot owners and burials.

Things to do Cemeteries near Blue Springs, NE