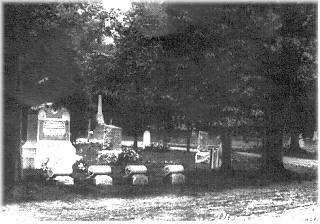 While cemeteries are the final resting place of friends, relatives, and community residents, they are also historical landscapes that reveal much about a community's social, political, economic, religious and ethnic history. In Lawrence, five historic cemeteries are scattered across the community and each gives a fascinating glimpse into the town's Free-State struggle, Civil War period, settlement days, and its flowering of cultural and community interests. Like most towns, Lawrence has famous men and women buried here, but the town's cemeteries are important for another reason - since the founding of our nation, American's views toward death and dying have changed, and nowhere is this more evident than in cemetery landscapes and in the forms of grave markers and monuments. Burial grounds in the United States have changed significantly through the years both in design and in purpose. Lawrence cemeteries date from 1854 - 1926, and demonstrate many of these cemetery trends.

The self-guided tour takes you to a home place burial site, a town settlement cemetery, and ethnic and institutional burial site at Haskell Indian Nations University, and a memorial park and a rural cemetery.

These cemeteries can tell you many things about Lawrence. Look for ethnic connections on markers or in birthplace. Burial locations within certain cemeteries also speak to socio-economic differences, with the wealthy buried on higher ground. Pay special attention to the memorial symbols, which usually tell about a person's activities, beliefs or age.

A self-guided tour brochure, Historic Cemeteries Tour of Lawrence, can be obtained at the Convention and Visitors Bureau located in the Depot in north Lawrence.

Things to do Cemeteries near Lawrence, KS