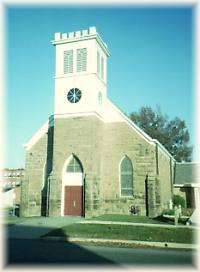 Episcopal Church - Built in 1902, the building was originally the home of the Methodist Church and remained so until 1911, when it was purchased by the Episcopal Church for the sum of $2,000. It is listed on the National Register of Historic Places.


In 1913 the church was remodeled and refurnished.

First Christian Church - Though earliest records indicate the Christian Church existed in Okmulgee prior to the turn of the century, the first actual documentation reflects a meeting of "Ladies Aid Society" at the home of Mrs. W.M. Cott, 110 North Alabama.

Construction of the present building began with the laying of the cornerstone on June 17, 1917. The first worship service was held in the new building on Sunday, May 5, 1918.

Come visit us in Okmulgee, Oklahoma

Things to do Historic Churches near Okmulgee, OK