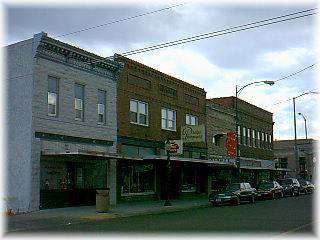 Carnegie Library
The Carnegie Library is one of the buildings in this Historic District. Andrew Carnegie awarded the city of Sidney $6,500 for the construction of this library which served Sidney from 1914 to 1965. The building now houses Sidney's Chamber of Commerce.

Additionally, the Essig family were early merchants of Sidney in the late 1870s and built many fine structures, which you find on the tour.

Mercy Essig Building
The Mercy Essig Building is one of the first buildings built by the Essig family. This native stone building was erected in 1885. In 1909, a fire completely gutted the interior. In the restoration, fire walls were built between existing structures on either side. This is the oldest building in the District.

Flora Essig Building
The Flora Essig Building, a fine, red brick building was erected in 1919 for the merchandising of hardware and furniture, in connection with an undertaking business. Elegant apartments on the second floor were the home of the Essigs.

Tyrone Essig Building
The Tyrone Essig Building was erected in 1887 of native stone (beneath the stucco) to merchandise stoves and later became a popular meat market. The original metal steps on the north side, led to the second floor occupied by The Sidney Telegraph.

You may see several other buildings consisting of commercial structures, a theater, post office, the Tobin Building, the site of Sidney's notorious Capital Saloon, and many more. Enjoy your stroll through Sidney's Historic Downtown District, and take yourself back to where it all began for one of America's favorite stopping places since 1867.

Things to do Tours near Sidney, NE