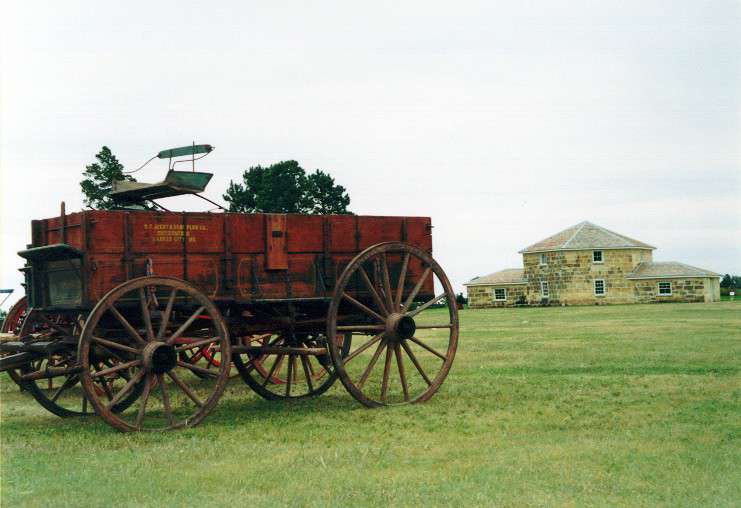 Fort Hays was an important US Army post which was active from 1865 until 1889. Troops from Fort Hays protected the stage and freight wagons using the Smoky Hill Trail to Denver, and construction workers who were building the Union Pacific Railroad. The original blockhouse, guardhouse, and officers quarters are located here as well as exhibits interpreting pioneer and military history.

After the fort was virtually destroyed in a flash flood in 1867, it was relocated to a site now just south of the city of Hays. Unlike the typical military posts of the earlier eastern frontier, there was no stockade or fortification wall. Instead, officers quarters, barracks , headquarters, storehouses, and other buildings grouped around a parade ground constituted the outline of the new Fort Hays.

A stone blockhouse, hexagonal in shape with two wings extending north and south, was equipped with rifle slits, but the fort was never attacked, and the building was actually used as a post headquarters and adjutant's quarters for the officer of the guard, a guard room, and a prison room with three cells, except for a small bakery, all other buildings - officer quarters, married enlisted men's quarters, barracks, hospital storehouses, and other housekeeping buildings were of frame construction.

Garrison strength at Fort Hays normally averaged three companies, or about 210 men. Fort Hays was home to the 7th U.S. Cavalry, commanded by Lt. Col. George A. Custer, the 5th U.S. Infantry, commanded by Col. Nelson Miles, and the 9th and 10th U.S. Cavalries, better known as the Buffalo Soldier. Marcus A. Reno, George A. Forsyth, and Philip H. Sheridan were also among the noted military figures associated with the fort.

In 1867, Hays City was staked out a mile to the east, and with the arrival of the railroad in October, the fortunes of Hays City and Fort Hays became almost inseparable. The military post was turned into a quartermaster depot which supplied other forts throughout the West and Southwest. Such an operation required a large number of civilian as well as military personnel, and Hays City consequently experienced rapid development.

The Fort Hays Historic Visitors Center was completely remodeled in the summer of 2010 with new displays, interpretive displays and life-size metal figures of people who lived at the fort. Figures of General Custer and Chief Black Kettle in the visitor center help tell the story of the clash of cultures that led to the fort being built. In the guardhouse, visitors can hear songs and stories from the fort's life, try on a uniform, spend time in a jail cell, and learn more about life as an enlisted soldier. In the blockhouse, visitors will learn about the officers of Fort Hays, discover the mysteries of the blockhouse architecture, and explore how the preservation of the fort has taken place.

The Hays Aquatic Park is the ideal place to cool off and enjoy some summer fun. The H.A.P. is located on approximately 3.5 acres of land and is located at 4th & Main. There are three bodies of water (lazy river, leisure pool, multi-purpose pool)

Things to do Forts near Hays, KS