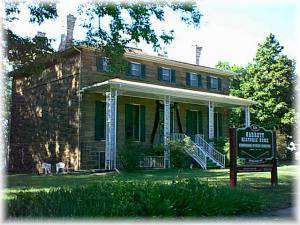 This historic home was built in 1867 as the commanding officers residence, and is listed on the National Register of Historic Places. The three story home was part of the Fort Gibson Fort established in Indian Territory in 1824. The privately owned home has been in the Judge Claude Garrett family since 1924. That year young lawyer, Garrett, and his bride, the former Katherine Oldham, ignored the advice of elders and bought a ramshackle stone home looking across the weed-infested parade ground of the decayed fort.

Wooden porches were replaced with ornamental iron columns. The front entrance as well as the tall French windows are original. In the typical style of the 19th century, ceilings on the second floor are 12 feet high allowing plenty of room for tall posts of a fine four-poster bed. The woodwork is hand-finished walnut and oak, all from trees cut in the river bottoms of the area. For 23 years, it sheltered Colonels, Captains, and Majors who commanded in the last years of Fort Gibson.

The house is rich in history that began with the fort and into the Judge Claude Garrett family. Once used as the family's residence, this restored mansion is open by appointment and for tours.

Things to do Museums near Fort Gibson, OK