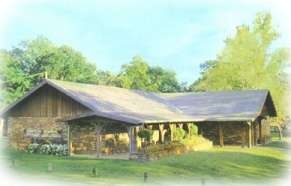 The Chouteau Memorial Museum documents life in the Three Rivers area, offering visitors a glimpse of life around a trading post. Exhibits include a partially recreated trading post and a flatboat. Visitors can view the wide variety of trade items, see an A.P. Chouteau journal along with other Chouteau family items, and see examples of native American clothing. A short video on the fur trade in Oklahoma is available.

The Chouteau Memorial is operated by the Oklahoma Historical Society. Elementary school programs are available and special programs and tours can be arranged

A community wide Chouteau Day Celebration is held each October and a Fur Trade Encampment is held each spring. Call the museum for specific dates.

Things to do Museums near Salina, OK