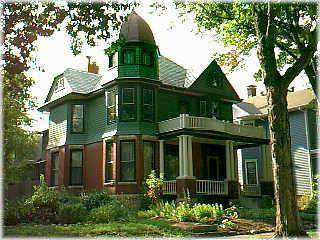 Architectural variety characterizes Old West Lawrence. From the beginning, the neighbor hood was home to Lawrence's elite. Homes were built not only to accommodate basic shelter needs, but also to make statements of wealth, prestige and fashion.

The oldest houses were built in 1860 and 1861. Five of these survived Quantrill's Raid of 1863. Half of the houses in the twelve-block area described in the self-guided driving brochure were built during the 19th century, and most of the rest were built before 1930. The Historic District, listed on the National Register of Historic Places, includes 126 houses.

Some of the oldest houses have survived with little stylistic modification. Others have undergone dramatic changes, as their owners have extended, remodeled and rebuilt them to match not only the needs of their families but also the design characteristics of their times.

A self-guided tour brochure, House Styles of Old West Lawrence, can be obtained at the Convention and Visitors Bureau located in the Depot in north Lawrence.

Things to do Tours near Lawrence, KS