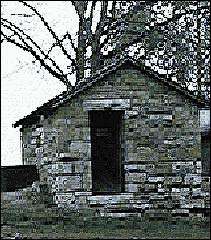 Used into the 1920's as a jail. It is now located on private property.

One of the oldest wood-frame buildings in Kansas. Designated a National Historic Landmark in 1975. Dedicated as a museum in 1995.

Constructed by members of the Lecompton United Brethren Church known as the "Radicals". Members opposed removing a ban against membership in the Odd Fellows, Masons, and similar secret societies and defected from the main United Brethren Church in 1899. Members disbanded in the 1920s. Defunct church purchased by the city in 1932 after their offices in the Council Building were destroyed by fire. Today the Lecompton community building and city offices.

William and Anna May Leamer were merchants from Pennsylvania who opened their first store in Lecompton in 1856 on the corner of Halderman and Woodson and their second store at this location in 1857 on Elmore Street. The store was damaged by the 1916 fire and was razed in 1919. The Leamers were true Lecompton pioneers. They were involved not only in starting a long-lived mercantile business, but also in promoting many civic activities including investing in Lane University, Rowena Hotel, the Lecompton & St. Joseph stagecoach line, a pontoon bridge over the Kansas River and various Lecompton churches.

Destroyed or severely damaged most businesses on the east side of Elmore Street. Only the Thomas Lee Hardware on the south end of the block and a shoe shop and the Council Building to the north survived. Brick buildings were erected in 1918 by the Lecompton Building Association.

A three-story, 45 x 90 foot, nineteen-room limestone hotel once stood at this location. Completed in 1858. Financed by Lecompton investors hoping to convince the territorial legislature to keep the capital in Lecompton. Advertised as one of the finest hotels in the territory. Business at the Rowena fell off soon after 1861 when the capital was moved to Topeka. Sold in 1865 to the United Brethren Church as home to newly founded Lane University. Continued as a dormitory until 1902. The H.D. Larimer Hardware and Implement Store from 1902 until 1916. Changed hands many times after 1916. Sadly, by 1947 the Rowena was so badly deteriorated that it had to be knocked down. City of Lecompton purchased the vacant lots where the hotel had once stood and created Rowena Park in 1982.

Former site of Governor Wilson Shannon's 1857 southern-style mansion. Albert Greene purchased the land, tore the mansion down, and built this house around 1891.

Originally the site of Rowena Hall. Built in 1857 by the same group of investors who financed the construction of the Rowena Hotel. Similar in design to Constitution Hall and temporarily used as a legislative hall. Removed to Lawrence in 1863 to replace buildings destroyed by Quantrill's raiders. Thomas Lee Hardware from 1880 to 1940.

Lecompton, founded in 1854 on a 640-acre Wyandotte Indian land claim, was originally named Bald Eagle because of the many eagles that nested along the Kansas River. Renamed the same year to Lecompton to honor Judge Samuel D. Lecompte of Maryland, chief justice of the Kansas territorial supreme court and president of the Lecompton Town Company. The territorial legislature chose Lecompton to be the capital of Kansas Territory in August, 1855.

Ellen Duncan, Lecompton artist in residence, created this mural of downtown Lecompton using old photographs taken of the east side of Elmore Street before the disastrous 1916 Fire.

To help control runoff from snow and rain, the Lecompton City Council ordered that limestone curbs and gutters be installed in 1888 along Woodson Avenue between Isacks and Boone Streets.
18. Leamer House

Grounds of the former thirteen-acre Lecompton capital square district. Deeded by Lecompton to the territorial government in 1855. Construction began here on an elegant capitol in 1855 with a $50,000 appropriation from Congress. Only the basement and the stone foundation was completed. Work ceased for good by 1857 when all the money was spent and antislavery legislators gained control. Unfinished capitol deeded by Kansas in 1865 to Lane University. Lane University building constructed in 1882 using capitol ruins. University closed and moved to Holton, Kansas, in 1902. United Brethren Church until 1920. Sold to Lecompton High School in 1920. Lecompton Historical Society organized in 1968 to save the abandoned, deteriorated structure. Restored, rehabilitated, and opened to the public as a museum in 1982.

Located on Halderman Street west of the capital square. Room for one hundred guests.

Located north of the capital square. One hundred and one antislavery prisoners captured after the Battle of Hickory Point, Jefferson County, in September 1856 were held prisoner here in the lower level.

Completed in 1857 and located one block from the ferry and depot. Later moved to Lawrence.

Built in 1856 on the southeast corner of Halderman and Second Streets.

John Calhoun, surveyor general of Kansas and Nebraska Territories and Lecompton Constitutional Convention president, opened his office here in June 1856. A prefabricated house brought by wagon to Lecompton. A wooden candle box containing fraudulent ballots for the pro-slavery Lecompton Constitution was found under a woodpile near the office. The box is on display at Constitution Hall.

Built by Italian stonemason Mark Migliario, possibly the first dwelling in Lecompton and the residence of William Simmons and his son Thomas who made their living fishing and operating a ferry on the Kansas River. Used later as a railroad pay station and as a private residence. Identified in this 1877 drawing as the "Democratic Headquarters." Stone addition added later to log cabin.

Site of Sheriff Samuel Jones's six-room log cabin. Used as the governor's mansion by John Geary in 1856. Engraving published by Harper's Weekly in 1857. Appears in the State Capitol murals in Topeka. Mansion window shutter displayed at the Territorial Capital Museum. The Leavenworth Kansas Weekly Herald of June 15, 1855, wrote that "of the many fine sites on the Kansas River, none is more beautifully situated or offers greater inducements to the pioneer than Lecompton...The country around Lecompton is fertile and unsurpassingly lovely, and must eventually become, if we may be allowed to use a trite phrase, the Garden Spot of Kansas."

Ferries ran to Rising Sun and Perry on the Jefferson County side. First settler William Simmons and his son operated a twenty-foot hollowed-out sycamore log named the Fairy Queen here in 1854. Ferries were replaced by a bridge in 1899.

Founded in 1857 directly across the river from Lecompton. First settler James Skaggs and his slaves supplied Lecompton with lumber. The town gained a reputation in the territory as a center of saloons, gambling halls, brothels, killings, and horse thieves. Crime and vice attributed to Lecompton actually occurred in Rising Sun. Dwindled and died with construction of Kansas Pacific Railway two miles north at Perry. No visible signs remain today.

Location of the first permanent bridge at Lecompton. A 1000 foot long, five-span steel, wood deck, one lane bridge. Completed in 1899. Condemned in 1965 and razed in 1969. Note the stone and concrete remnants. Modern 1640 foot steel and concrete bridge completed in 1970 several hundred yards downstream.

Many steamboats attempted to ply the Kansas River, but few successfully transported supplies and travelers to the interior territorial river towns of Lawrence, Lecompton, Topeka, Pawnee, and Fort Riley. Most boats spent the majority of their time grounded on sandbars waiting for the river to rise. The steamboat experiment on the Kansas River ended with the construction of railroad bridges over the river in the 1860s. The Lecompton levee was one hundred to two hundred feet wide and a mile long. By the early 1870s it was abandoned to make way for the construction of the Atchison, Topeka, and Santa Fe Railroad right-of-way.

Atchison, Topeka, and Santa Fe Railroad laid track to Lecompton in 1872. First depot located at the east end of Second Street. Second depot located west of bridge built in 1902 and razed in 1961.

Opened in 1859 and located across Second Street from the American Hotel. Removed to Lawrence.

One of the first of four churches established in Lecompton. Congregation organized and built a wood-frame church with a prominent steeple in 1857. Disbanded in 1872. Used as a school house, boardinghouse, and private residence by 1881. Burned in 1920s.

Things to do Tours near Lecompton, KS