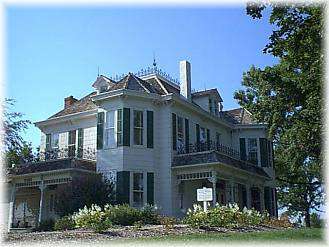 The Lackmans found the perfect place to start their new life in the great plains and endless sky of Kansas. When they arrived in 1885, they began construction on an exquisite farmhouse that would showcase the talents of internationally renowned artisans and take more than two years to complete. No expense was spared: This was, after all, a visual statement of their quest for success in the New World.

Yet, while the Lackmans were building their homestead, they also were instrumental in establishing local trade opportunities north and Olathe to the south. Unfortunately, at the height of this new business venture, two of the Lackman's workers ran off with the $40,000 company bankroll -- causing them to lose not only their share in the railway but, eventually, their prized farmhouse as well. The first chapter in the story of the Historic Lackman-Thompson Estate had come to a close, but not without a hopeful foreshadowing of the new era that was to follow.

In 1908, William Lackman sold his farmhouse, its furnishings, and the surrounding property to Kansas City horse and mule dealer, Frank Thompson. Having been victims of floods in 1903, 1904, and 1908, Thompson, his wife, Carrie, and young son, Hugh, saw the estate much like the Lacmans once did: as a symbol ofhope for the future.

The family prospered in their new home. Because of the railway that William Lackman had helped to create, the Thompsons were able to sell horses and mules all over the country -- to businesses, to the New York Police, and to buyers in the south for work in the cotton fields. During World War I, Frank and Hugh even supplied 1,000 horses to the U.S. Calvary for shipment to France. With their success also came improvements to the estate. The Thompsons were one of the firsts to install their own electric light plant and water well. And, a unique red brick barn with an arched wooden roof was added in 1932 -- designed interestingly, by an architect Thompson had found hitchhiking in the area.

In 1922, Hugh left the estate and married; but, he and his wife, Mary, returned to take over the farm upon Frank's death in 1936. There they raised six children -- another generation of dream builders born ... another chapter written in the story of a rare community legacy.

The home, which contains 2788 square feet of floor space, was listed on the Register of Historic Kansas Places. A joint effort between the City of Lenexa, Johnson County, the State of Kansas and many civic organizations, including the Lenexa Historical Society, restored the home to its original beauty. Today this lovely old home houses the Lenexa Chamber of Commerce, the Lenexa Economic Development Council, and the Convention and Visitors Bureau.

The Lenexa Historical Society conducts tours of the home, by appointment.


Come visit us in Lenexa, Kansas

The 1912-1913 Frisco Train Depot was relocated to the Legler Barn Museum Complex in 1987, from its long time home in old town Lenexa at the intersection of Santa Fe Trail Drive and Pflumm. The Depot features the exhibit By Way of Lenexa:

Things to do Historic Homes near Lenexa, KS