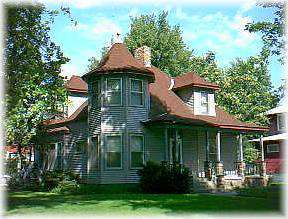 Take your own personal tour down beautiful tree-lined streets, graced with lovely older homes and buildings. Many of the downtown buildings used bricks from a local brickyard. Settled by Swedes and Germans, the town has many homes that boast a Scandinavian influence in architectural style. Homes on this tour include one that was a wedding present, one that was a hospital, one that has a widow's walk and one that had a back staircase that was hidden by a bookcase. Take the tour and find out the long-forgotten history. It will take you north from downtown along tree-lined streets to Lake Helen which has become a beautiful recreation site. A two mile paved walking path winds around Lake Helen.

1402 Lake Avenue - Dr. Plum, one of the first doctors in Gothenburg, built this home in 1899. The wooden design around the turret windows is original. The master bedroom occupies the upper turret and the living room occupies the lower. Dr. Plum owned the first automobile in Gothenburg; a high-wheeled chain drive, with a stick-like steering device.

The complete tour of twenty buildings is available in a self-guided brochure available at the Gothenburg Chamber of Commerce office.

Things to do Tours near Gothenburg, NE