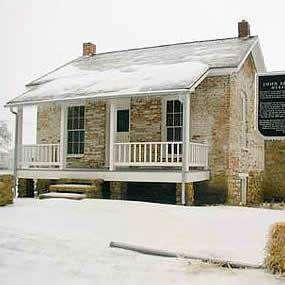 The Hobbs Park Memorial is a new public monument located in historic Old East Lawrence, which builds upon the community's abolitionist roots and reminds our state and nation of the viligance and sacrifice freedom requires. The monument is comprised of an 1860s masonry dwelling, the Murphy/Bromelsick house, which was constructed in the "rebuilding" period in the City's history, after the 1863 sacking, burning and massacre at the hands of William C. Quantrill.

The house, which could not be preserved at its original site at 909 Pennsylvania, was recently moved to a public park, which was the home-site of an important founder of Lawrence, Mr. John Speer. Speer was a leader of the rebuilding of Lawrence after the raid.

The memorial is the first in more than 70 years paying tribute to the vision, perseverance and sacrifices of Lawrence's founders and early residents.

Address: Located in Hobbs Park at 11th and Delaware Streets.

Things to do Memorials near Lawrence, KS