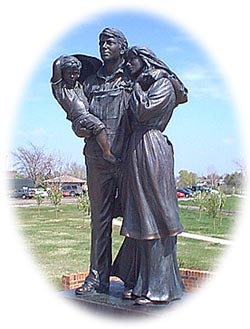 It was a cold, windy October in 1883 when Holdrege was born.

Early settlers in Phelps County were primarily of Swedish descent. Though many came directly from Sweden, the majority moved here from Swedish settlements in Illinois. There were no trees in Holdrege when the Swedes came. The Swedes, recalling wooded hills of Scandinavia, found the barren prairie land strange and windswept. They immediately planted trees and set them in straight rows. That pattern of straightness leaves its imprint on Holdrege today.

Holdrege became the "Magic City of the Plains," a name well deserved, as before the end of December, when the first train whistled into town, 132 substantial buildings were in place. Another rail line west from Holdrege, the "High Line," was started in 1885 and ran to Cheyenne, while in 1886, the Holdrege to Kansas City line called the "Polly" was completed.

Holdrege, named for George W. Holdrege, general manager of the Chicago, Burlington, and Quincy Railroad Company, was incorporated as a village in 1884, and in three years boasted a population of over 2,000.

In 1995, Holdrege was selected No. 38 of the 100 best small towns in America with a population of 5,000 to 15,000 by Norm Crampton, author of "Best 100 Small Towns in America." Holdrege is blessed with wide-open spaces, tons of fresh air, a generous and safe water supply. Adding that to a heritage of hard work and strong spiritual values all adds up to a "Genuine Nebraska Town" that truly provides THE GOOD LIFE!

With the building of the city auditorium in 1916

March is the peak month for viewing waterfowl at all of the wildlife preserves. At the Funk Lagoon you may see more than 500,000 ducks and geese per day, and over 20

Things to do near Holdrege, NE