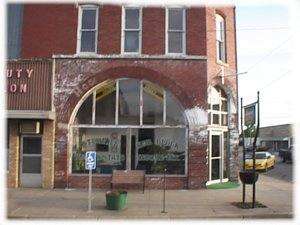 At the corner of Main & Noble you will find Stewart Real Estate and H & R Block. It hasn't always been that way. In 1906 this two-story building was known as the Hooper Drug Store. Residents of the community remember riding their bicycles up to an outside window to order ice cream. In the early days this was a hopping place. Many people reminisce about climbing up the stairs to a dance hall.